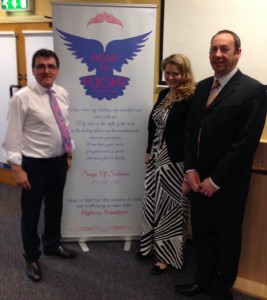 My name is Katherine Duncan, I’m 25 and I’m from Kells, Many of you heard me speak at New Dawn last month about the work that The Lord has called me into, in São Paulo Brazil and that I will be going out as a Latin Link missionary in August.

The issue of Child Sex Trafficking is one that many wish to turn away from or avoid, because it is an unpleasant truth that we would rather pretend does not exist. It is not easy listening for those of us who have young children, grandchildren and nieces/nephews. But as the church of Jesus Christ we know that we will have to answer to The Lord one day about what we did or did not do after we heard the truth.

As the great Abolitionist William Wilberforce once said,

You may choose to look the other way but you can never again say that you did not know.

The reality sadly is that there are approximately 27million slaves in the world today, that is more than the entire number of slaves recorded throughout the 300 years of the slave trade in Britian/America. But statistics are cold, nameless and faceless. Numbers do not tell the story of each individual, each mother, father, sister and brother affected by its horrific evil dominion on this earth.

Brazil sadly has the second largest trafficking system in the world. This is specifically focused on the trafficking of children for sex. It is estimated that between 500,000 and 2million children are working as Child Prostitutes. As you can tell from the large gap in this estimate range, very little has actually been spent on the Government to find out the correct number. Because the government and police system in Brazil is very corrupt, it is suspected that they involved to some level. Those working in the community and as missionaries are saying that the statistics are only scratching the surface of the problem. But in this brokenness, God is at work. God is raising up people across the world to respond to the cries and calls of His precious children.

Fight for Flight exists as a ministry to raise awareness, prayer and financial support against Child Sex Trafficking in
Brazil.

Arise, my love, my beautiful one, and come away.
O my dove, in the clefts of the rock, in the crannies of the cliff,
let me see your face,
let me hear your voice,
for your voice is sweet,
and your face is lovely.

These children are like beautiful doves onto The Lord, who have been hidden away in dark crannies, whose face and whose voice have been hidden and silenced. But God is calling them out because He wants to see their lovely faces and hear their sweet voices.

We thank you so much for your support as a Church, We could not do this without the support of the Body of Christ.

Bless you all,
Kat Duncan
Latin Link
The Fight for Flight Team

There are no events to show.